What Every Twin Falls Resident Should Know About Earwig Control

Earwigs are strange-looking pests that most people don’t like to encounter around their Twin Falls, Idaho home, or business. These long, narrow insects have a pair of antennae and are a red-brown color, but they are best identified by the large pair of pincers they have at the end of their bodies. 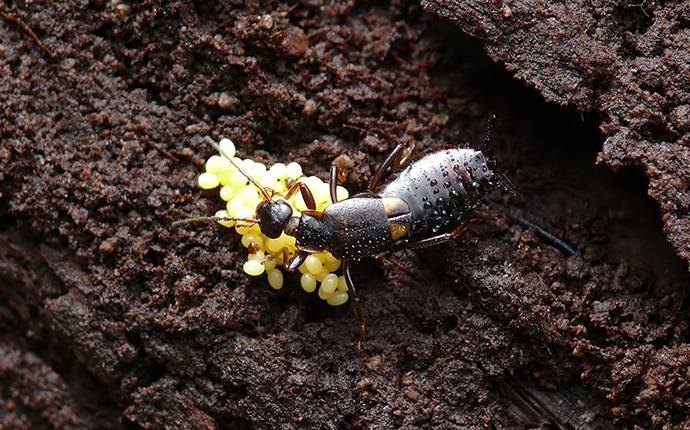 Because they can look rather scary, there are many myths and questions surrounding earwigs. In this guide, you’ll learn all you need to know about earwigs and how to prevent them.

Do Earwigs Crawl Into Ears?

Probably the biggest misconception and myth surrounding earwigs is that they crawl into human ears in order to lay their eggs inside of our brains. While this is a rather terrifying thing to think about, it’s not true and is just an old wive’s tale.

Earwigs don’t try to climb into ears, nostrils, or mouths, and if they do, it’s just an unpleasant accident. They don’t lay their eggs inside of humans either. While any small insect could accidentally crawl into your ear, this is rare, and earwigs aren’t any more likely than other species.

Looking at the pincers on an earwig can be rather terrifying, but these pests aren’t really dangerous. While it’s true that they can pinch with their pincers, they rarely break the skin. Also, they aren’t going to seek you out to pinch you and will likely only do so if picked up or touched.

Earwigs also aren’t known to spread any germs or diseases to people or pets, so they are mostly just upsetting to look at without posing any real threats.

They also aren’t able to cause any real property damage, so overall, they are much less of a problem than some of the other common pests in Twin Falls such as rodents or cockroaches.

What Attracts Earwigs To A Home?

Earwigs mainly prefer to live outdoors, and they are usually found in places such as gardens, fallen logs, woodpiles, or under stones. However, while they prefer to remain outdoors, they will come inside if the weather outside gets too hot or dry.

Earwigs prefer humid environments, so having excess moisture around your property can attract them. Factors like leaky plumbing or damp, unventilated basements can draw them in.

Since earwigs are rather tiny, they can fit through many small cracks or holes in the walls or foundation of a building. They can also fit through gaps around doors or windows or through screens that are broken or ripped.

Once earwigs get indoors, they are usually found in basements, crawls spaces, or under appliances and cabinets in kitchens and bathrooms. They prefer more humid, dark areas, but it’s not unheard of to find one crawling around other areas of a home.

How Do You Eliminate Earwigs?

Even though earwigs aren’t dangerous, they still aren’t a welcome houseguest. If you’re seeing these bugs around your property, there is one easy and effective way to remove them and keep them away for good. The experts at Owyhee Environmental provide professional assistance that will keep these and other unpleasant pests away, and we can also swiftly remove any current earwig problems.

We offer both residential and commercial services, and we make it easier than ever to get started by offering free quotes. Just contact us today to get started.