Home › Blog › The Trick To Keeping Wasps Away From Your Boise, ID Yard

The Trick To Keeping Wasps Away From Your Boise, ID Yard

In comparison to other pests like roaches and rats, wasps might not seem so bad. Many species don’t want to get inside your house. They don’t spread disease. Most people wouldn’t have anything against them if they didn’t sting.

Unfortunately, that’s the rub. Wasps do sting – and they can sting a lot. Unlike honeybees, whose stingers tear loose from their bodies after one use, wasps can sting over and over. Some species are quite aggressive and will even chase perceived threats away from their nests, stinging as they go. Here in Boise, ID we’ve got our fair share of wasps to worry about. Let’s talk about a few of them. 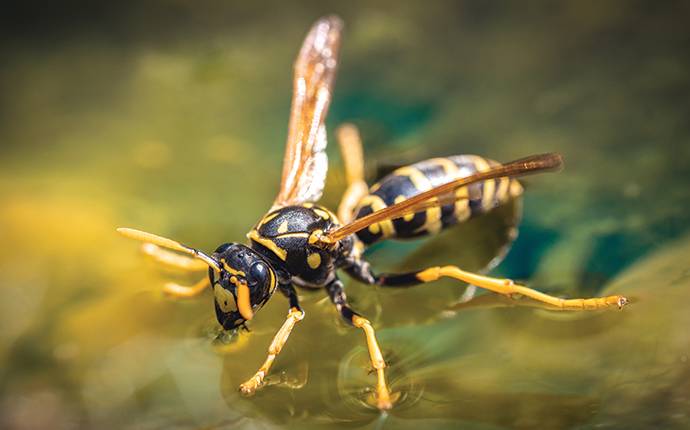 Paper Wasps
These dark or reddish-brown wasps have yellow markings, measure around an inch in length, and build their nests by collecting plant materials and chewing them into paper, which they then glue together to make a nest that resembles a gray honeycomb. Like many wasps, paper wasps will only become hostile if they feel they or their nest is being threatened. If you approach or mess with their nests, they will deliver one or more painful stings.

Yellowjackets
Yellowjackets are so named for the black and yellow striped pattern found over their entire bodies. An aggressive, ground-nesting social wasp, they are infamous for their propensity to swarm. When their nest is threatened (like when you walk across it or unknowingly run it over with a lawnmower), dozens to hundreds of yellowjackets will ascend from underground to chase away the perceived threat. This can leave you with multiple painful stings.

Bald-Faced Hornets
Hornets are a subtype of wasp that is usually bigger and fatter than regular wasps, and the bald-faced hornet is no exception. A relative of the yellowjacket, these mostly black-bodied, white-faced hornets are social wasps as well, though they prefer to nest above ground. You’ll find large, bell-shaped paper nests sitting in the tops of trees, nestled between attic rafters, or suspended from building ledges. Bald-faced hornets are usually docile if left alone, but don’t be fooled by their tendency to mind their own business. These hornets will swarm like yellowjackets and aggressively defend their nests from anything that approaches them, so it’s best to avoid invading their space.

Wasp stings are painful and can cause dangerous allergic reactions, so it’s important to avoid infestations. A proactive approach to keeping wasps away is much easier than getting rid of them once they’ve established their nests because of their tendency to aggressively defend them. The best way to do this is to avoid leaving things out that attract them.

Adult wasps eat mostly sugar, so things like sweet drinks and foods, floral perfume, hummingbird feeders, and certain types of flowers are all likely to attract them. A few wasp species are less picky, and they might become interested in your uncovered garbage as well. That means your first line of defense against wasps is going to be to get rid of or cover up these items and plant wasp-repellent herbs and flowers (like mint, citronella, and clove) to mask their scents.

Another big thing that attracts wasps is prey. Many species kill other bugs like cicadas, caterpillars, spiders, etc. to lay eggs inside them. The larvae then use the body of their host as a food until they mature. That means if you have an infestation of wasp prey – like caterpillars – that infestation could also attract wasps if you don’t deal with it.

While you can reduce wasp attractants, you can’t eliminate them altogether. If you notice an already established infestation, it’s important to avoid trying to deal with it yourself because that’s a great recipe for getting stung. It’s better to call the pros. Here at Owyhee Environmental, we have the expertise to deal with even the most aggressive wasp species. Our pest control programs include season-specific treatment plans, eco-friendly services, and a 100% satisfaction guarantee. So give us a call at (208) 391-5153 or visit our contact page at Owyhee Environmental to get started today!