While there are many species of spiders in Twin Falls, Idaho, one of the more common in the area is the wolf spider. This species can look particularly terrifying as it is larger than most other species in Idaho and can also run quickly. However, these spiders are mostly considered a nuisance pest. 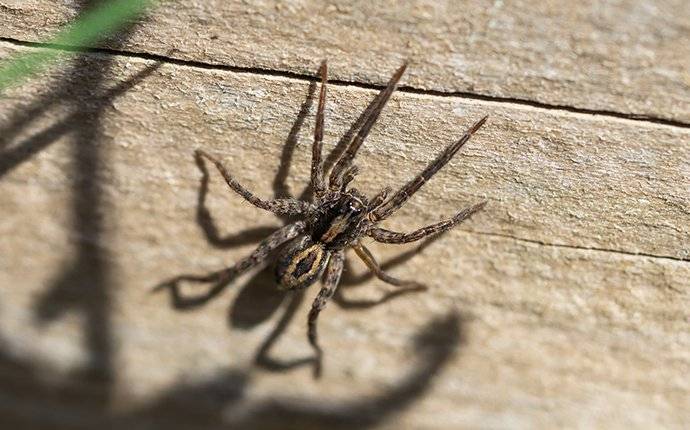 One of the main things that set wolf spiders apart from many other spiders is that they don’t build webs to catch their prey. Instead, they hunt their prey by chasing them down, and this unique method of catching their food is why they have the name of the ferocious predator, the wolf.

Since wolf spiders run to catch their prey, they can appear aggressive to humans, but the truth is that most of the time these spiders are trying to get away from people, not attack them.

Wolf spiders are often mistaken for other species such as the hobo spider, but there are a few characteristics you can look out for to identify wolf spiders and tell them apart from look-alikes.

The main trait that wolf spiders have is their thick legs and stout bodies. They have a formidable look, and their legs are strong in order to chase down their prey. Most wolf spiders also have hair that covers their body and legs. They can grow to be an inch and a half long, and while their coloring and markings can range, they are usually a dark brown color with pale yellow markings.

There’s no denying that wolf spiders can be terrifying to encounter because of their size and speed. These spiders are especially upsetting to people with arachnophobia or even just a small level of fear toward spiders.

However, despite this intimidating appearance, wolf spiders are considered harmless. They don’t pose any health risks to people or pets. While they do have fangs and venom that they need to inculcate their prey, this venom isn’t strong enough to hurt you, your family, or your pets.

While it is possible to be bitten by a wolf spider, these bites are uncommon. These spiders mostly want to stay out of your way.

The other thing to note about wolf spiders is that while they mostly live outdoors that they will come inside in pursuit of their prey. When outside, they usually hide under things like stones, firewood, and fallen trees. If they are indoors, they will search out hiding spots near walls and baseboards and are often found under furniture or in closets.

As with most spiders, the main reason you’ll notice an influx of wolf spiders is because of other pest problems. Wolf spiders don’t get into homes looking for shelter, but they will follow prey. So, if you have underlying pest problems, you’re more likely to encounter wolf spiders around your property.

The most effective way to control wolf spiders is to get rid of their pest prey. If you're looking for reliable spider prevention and removal, let the experts at Owyhee Environmental help you.

We provide both residential and commercial pest control options that provide consistent, effective results using environmentally friendly products. We also offer free inspections, so reach out to us online or give us a call to get started.

I noticed increased spider activity in my home with the changing of the weather and called Owyhee Environmental immediately. They were extremely helpful and were able to come to my home within a few days. They were on time, professional, and efficient. I would highly recommend Owyhee’s pest control services and plan on using them again in the future!