Home › Blog › Are The Spiders In Boise Dangerous For My Health?

Are The Spiders In Boise Dangerous For My Health?

While there are many pests that can cause problems for Boise, Idaho residents, one of the most feared and hated pests of them all is spiders. Most people find spiders rather upsetting to look at, and some people are particularly scared of them. Much of this fear comes from the belief that spiders are very dangerous and that their bites are almost always a concern. However, this isn’t actually the case overall. 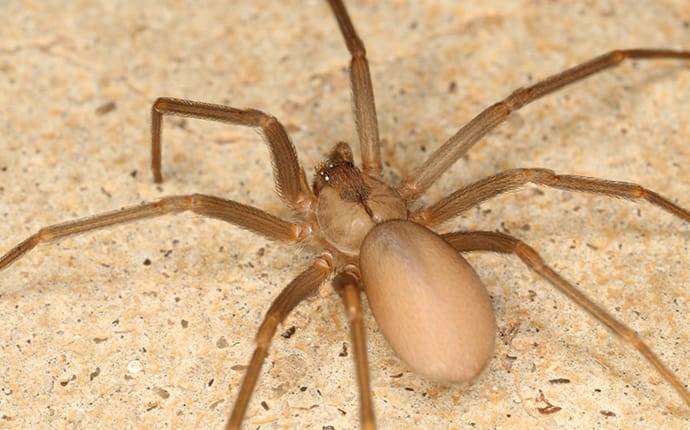 The vast majority of species in the area that invade properties are mostly harmless. While all spiders can bite and have venom to harm their prey, most don’t have strong enough venom to hurt you. However, there are a couple of exceptions to this.

The black widow spider and the brown recluse spider are both considered dangerous to humans. Both of these species have more potent venom that can cause serious side effects and, in rare cases, fatalities.

Because of the risks of having these species around your home or business, this guide is here to help you learn how to identify and prevent them.

Black widow spiders might be one of the most notorious species of all time. They are jet black and have bright red markings on their underbellies in the shape of an hourglass. They also have rather rounded bodies and spindly legs.

While black widow spiders usually live outside, they can make their way inside in some cases. They prefer dark, cluttered areas, especially woodpiles, garages, window wells, or even in the back of closets.

Luckily, their bites are rare, but they can happen. The bite mark can look different depending on the person, but these bites often appear as two small fang marks. Following a spider bite, it's important to keep an eye out for symptoms such as body aches, nausea, and swelling. And, if you suspect a black widow bite, contact a healthcare provider for help right away.

What To Know About Brown Recluse Spiders

While black widow spiders might be rather recognizable, the brown recluse spider is the opposite. They are somewhat generic in appearance and can easily be mistaken for other spider species.

One of the best ways to identify them is to look at their legs as brown recluse spiders don’t have any markings or patterns them. They are a tan to light brown color and have a pale violin-shaped marking behind their backs. Brown recluse spiders are often found under organic materials around a property such as logs and rocks or in woodpiles. When they get inside, they seek out dark areas to hide, such as inside boxes, in the back of closets, or cluttered garages.

While brown recluse bites are often painless at first, they can start to develop redness and swelling, or even a bulls-eye pattern. The bite site will often start to appear worse over time and may become bruised-looking. If you think you’ve been bitten by a brown recluse or notice any strange side effects from a bug bite, seek medical attention right away.

How Can You Keep Spiders Away?

Because spiders are so upsetting to encounter, and because of the risk of having dangerous spiders around your property, the best way to handle them is with prevention.

The experts at Owyhee Environmental provide ongoing spider control services that will keep dangerous and harmless spider species from coming around. And, if you’re already dealing with spiders, just give us a call, and we can remove them altogether.

Jordan and his team were prompt, professional, and kind. Jordan was very knowledgable regarding different types of home pests and the best treatments for them. He asked and listened to my concerns and was diligent in following up to ensure our needs were taken care of. If you're looking for a trustworthy and honest team, Owyhee Environmental is the way to go!